Cause Given For J-59 Crash That Injured Four 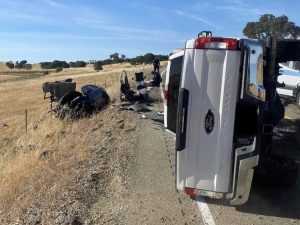 La Grange, CA — On the afternoon of June 5th, 2021 at around 4:20 pm, 48-year old Ricky Andrew Haines of Oakdale was driving his 2008 Toyota Camry northbound on La Grange Road near Paseo Seven Legends. Coming the opposite way was 51-year old Shannon Leann Eldrige of Auberry, CA who was driving a 2017 Ford F350 southbound along with her two passengers, 77-year-old Kenneth Long and 72-year-old Theresa Long, both from Auberry, CA.

Ricky Haines allowed his vehicle to travel to the left over the double yellow lines, directly in front of Ms. Eldrige’s vehicle. The result was the vehicles crashing head-on, with all the occupants sustaining minor injuries. Mr.Haines was transported by air ambulance to Doctors Medical Center for treatment. The passengers in the other vehicle were transported to Adventist Health Sonora and the driver, Ms.Eldrige was treated at the scene. It was determined that all the occupants were wearing their seatbelts at the time of the crash and alcohol or drugs are not suspected to be a factor. The original story about the incident can be found here.