Sonora To Vote On Budget And Property Purchases 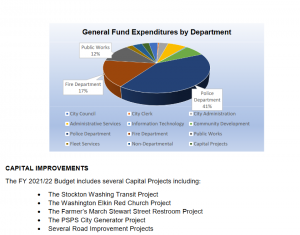 Sonora, CA — The Sonora City council will vote to pass a new budget this evening.

The overall fiscal year 2021-22 proposed spending plan is around $15.1 million, an increase of $3.8 million (34-percent) compared to the current fiscal year. The city notes that the change is primarily due to an increase in capital projects. They include a Stockton Road/Washington Street transit project, the Washington/Elkin Red Church circulation project, a Farmer’s Market – Stewart Street restroom project, a PSPS city generator project and several road projects.

Meanwhile, the General Fund budget is proposed to be $8.7-million, an increase of 9.6-percent. The jump is a result of a new position in the Community Development Department (City Planner) as well as increased negotiated personnel costs and benefits. To view the full budget documents, click here.

Also, the city will vote on purchasing a dilapidated old home at 290 South Stewart Street with the plan of eventually using the property for some form of low-income housing. The purchase of the property ($150,000) and rehabilitation would be funded by Redevelopment Housing Program and Community Development Block Grant funds. The city is also planning to purchase a parking lot at the intersection of South Washington Street and Church Street so that it can provide public parking in the downtown area. The site was previously a gas station.

In addition, the council will vote to add Alissa Mansfield to its Social Equity Committee. Today’s meeting starts at 5pm. Click here for information on how to take part in the virtual session.