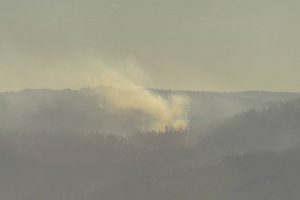 Update at 9:30 a.m.: CAL Fire ground crews have contained a vegetation fire on Summit Level Road in the Arnold area of Calaveras County. The Ridge Crest Incident broke out around 7 a.m. near Forest Road 7N08. A plume of smoke could be seen in that vicinity, but it was in a remote area making it hard to find its exact location initially. CAL Fire reports that crews have contained the blaze at three acres and will remain on the scene mopping up and checking for hot spots for the next couple of hours. What ignited the fire is under investigation.

Update at 9 a.m.: CAL Fire dispatch reports crews are making progress on the Ridge Crest Incident. The vegetation fire is holding at three acres in size. They add that the blaze is surrounded by three roadways and crews are working on getting a hose line on the fourth side of the fire. The flames are burning in brush and timber and moving at a slow rate of spread.  All responding aircraft have been called off the scene.

Update at 8:10  a.m.: CAL Fire dispatch reports ground crews have located a plume of smoke in the Arnold area of Calaveras County that they were having a hard time pinpointing due to its remote location. The Ridge Crest Incident is on Summit Level Road near Forest Road 7N08. CAL Fire dispatch reports the fire is two acres in size and burning at a slow rate of spread in brush and timber. No structures are threatened. Further details will be updated when more information comes into the news center.

Original post at 7:30 a.m.: Arnold, CA — A plume of smoke in the Arnold area of Calaveras County has ground crews heading in that direction. CAL Fire dispatch reports that the fire is in a remote area and pinpointing its exact location has been difficult. Also, due to that, there is no fire activity to report. The blaze is being called the “Ridge Crest Incident.” An update will be provided as soon as new information comes into the newsroom.