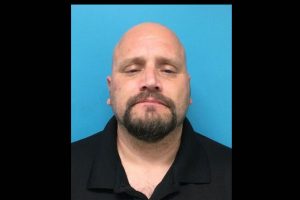 Jamestown, CA – A Twain Harte man was arrested after being pulled over in the Jamestown area and drugs were not the only thing found in his vehicle.

A loaded 9mm handgun was also discovered, which the driver, 46-year-old Jarrett Scheiding, was not allowed to have since he is a felon. The search of his vehicle was the result of a routine traffic stop conducted by a Tuolumne County Sheriff’s Deputy. He was patrolling along Highway 108 recently around 3:30 a.m. when he spotted Scheiding’s vehicle with broken brake lights.

Inside the vehicle, the deputy also found loose ammunition, drug paraphernalia, and suspected methamphetamine hidden throughout it. Sheriff’s officials did not disclose an exact amount. A record check showed Scheiding he had an active warrant for driving without a license. He was subsequently arrested for being armed while having drugs, a prohibited person with a firearm and ammunition, having a controlled substance, and driving without a license in addition to his warrant. His bail was set at $25,000.