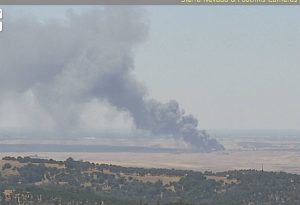 Update at 1pm: A barn fire near the intersection of Milton Road and Dunton Road has been putting up smoke this afternoon. CAL Fire reports that thankfully it was held to the barn and did not spread to any nearby vegetation. Crews will work to fully extinguish and mop-up the incident this afternoon. It is not immediately clear what ignited the fire. The area is west of Copperopolis and near Farmington.

Original Story posted at 12:40pm: Local air and ground resources are responding to a fire west of Copperopolis, in the Farmington area, near the intersection of Milton Road and Dunton Road.

A barn is reportedly on fire and there is concern it could spread to vegetation. Be prepared for activity in the area.