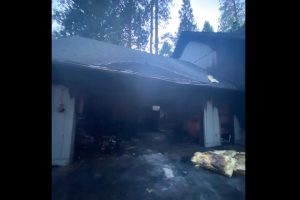 Twain Harte, CA – Fire officials know what caused a house fire in Twain Harte that forced a family from their home Thursday evening.

Fire officials remind the public to always Dispose of any barbeque coals in a metal can with a lid that is distanced from any other combustible material.  Thursday night’s fire started in the garage and then the flames quickly moved into the house. Luckily, all inside, three adults and four children, made it out of the house safely with the Red Cross called in to assist them.

Fire crews were able to knock down the fire in about an hour and remained on scene mopping and investigating a cause until midnight. The blaze broke around 7:15 p.m. in the 2300 block Strauch Drive off Joaquin Gully Road, as earlier reported here.