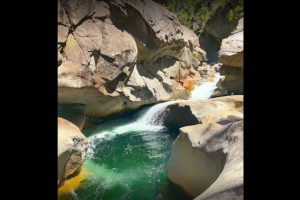 Update at 8:40am 5/17/21: Tuolumne County Sheriff’s Office spokesperson, Deputy Nicco Sandelin, is providing an update about the drownings that occurred last Friday in the God’s Bath area of Tuolumne County. Initially, there were some communication issues with the team in the isolated area of the county. Deputy Sandelin reports that there were two confirmed deaths, not three, and were both males. They are not searching for anyone else. No names have been released, as family members are still being notified.

Update at 10:20 a.m. 5/15/21:  Three people are believed to be dead after drowning in God’s Bath swimming hole along the Clavey River in the Tuolumne River Canyon yesterday.

Dive crews continue to search for the body of the third victim. Tuolumne County Sheriff’s spokesperson Nicco Sandelin reported this morning, “After talking with witnesses and family members on scene, we have determined that two men have drowned.”

As reported below on Friday,  the body of one of the men was pulled out of the basin around 6:30 last night, but because of communication issues with rescuers, their gender was not revealed at that time.

This morning, Sandelin added that the Tuolumne County Search And Rescue (SAR) and dive teams are still working to recover the other man’s body noting, ” We want to extend our sincere condolences to the victim’s loved ones.”

Update at 5:40 a.m. 5/15/21: Two people were confirmed drowned and the search for a third victim will resume this morning. Tuolumne County Search and Rescue (SAR) and the dive team continued to search for that drowning victim in the God’s Bath swimming hole along the Clavey River in the Tuolumne River Canyon into the night on Friday. Just after 9 p.m., sheriff’s spokesperson Nicco Sandelin relayed, “Sheriff’s Office personnel have suspended the search until tomorrow due to nightfall and low visibility.”

Update at 6:40 p.m 5/14/21.:  Tragically, another body has been pulled from the waters of the God’s Bath swimming hole along the Clavey River in the Tuolumne River Canyon.

Tuolumne County Sheriff’s spokesperson Nicco Sandelin tells Clarke Broadcasting, “A second victim has been recovered from the water and has unfortunately been pronounced deceased. Due to communication issues related to the remote location, a gender of the second victim has not been relayed.”

Dive teams and Search and Rescue continue to drag the basin working to retrieve the third victim. The third victim’s condition is unknown at this time. Further details on the first victim are below.

Original Post at 3 p.m 5/14/21.: Tuolumne County, CA – One person is deceased after drowning in the God’s Bath swimming hole and deputies are searching for two other possible victims.

After inquiries from Clarke Broadcasting regarding the activity in that area, Tuolumne County Sheriff’s spokesperson Nicco Sandelin reported that deputies were “actively responding to a reported drowning” at Gods Bath swimming hole in the Tuolumne River Canyon. He detailed, “When fire, medics, and deputies arrived on scene, they were able to confirm three drowning victims. One victim, an unknown-aged female, was retrieved from the water and pronounced deceased. Two other victims remain in the water, their conditions unknown.”

The Tuolumne County Search And Rescue (SAR) team is headed to the area to conduct a swift water rescue along with the Tuolumne County Dive Team and a CHP Helicopter. Sandelin relays that is all the information he has at this time, but he will provide an update once more details become available.