How About Seeing Some Giant Sequoias This Weekend? 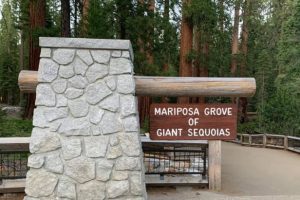 Yosemite, CA – Visitors can once again be amazed by the Mariposa Grove of Giant Sequoias this weekend.

A windstorm that blew through on January 19th causing extensive damage to the park, forcing its closure, as reported here. The grove, in the southern section of the park, was one of the hardest-hit areas. A month later, crews were still cleaning up the mess in the grove that remained shut down, as detailed here.

The grove officially reopened on Wednesday, May 5, at 8 a.m. with some changes for viewing the historic trees. The shuttle bus will not operate this season. That means visitors will have to hike the four-mile round-trip trek with 500 feet of elevation change. Park officials advise it is an additional 1.5 miles round trip and another 500 feet of elevation change to the California Tunnel Tree and Grizzly Giant. The latter’s main trail remains closed due to storm damage, but hikers can use the service road to reach it.

There is no drinking water available in the grove, but there is at the Mariposa Grove Welcome Plaza near the south entrance and Mariposa Grove Arrival Area. The plaza has flush toilets while the other has portable toilets. All other trails are open, but there could be downed trees blocking areas. Park officials add that bicycles and vehicles with a disability placard can drive on the Mariposa Grove Road to the arrival area, but no traffic is allowed beyond that point.