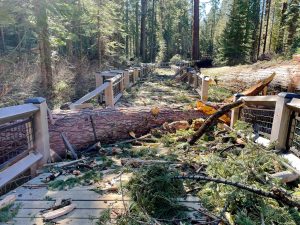 Yosemite, CA — One aspect that Yosemite is well known for is its towering Giant Sequoias, and the Mariposa Grove was notably impacted by a powerful storm system last month.

The National Park Service has been assessing the damage in the park after a Mono wind event left behind damage to trees and buildings on January 19. Hit hardest was the southern portion of the park where the Mariposa Grove lies.

Yosemite officials have put out a statement, “As heartbreaking as this is for all of us, it is a reminder of the dramatic lives these quiet giants can live. Sometimes standing for 3,000 years or more they are witness to the full range of events that nature has to offer. With a variety of pest-resistant adaptations and resistance to fire, a mature sequoia tree almost always dies from toppling and this rot-resistant wood may lie quietly with us for centuries more.”

The park also has 15 special “named sequoias,” and it is believed that all of those survived.

The Mariposa Grove remains closed at this time. Falling trees caused damage to the restroom and the boardwalk.