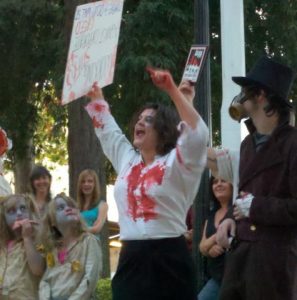 Courthouse Park in Sonora will see two different events this Saturday, that in some cases may be blended together: The March Against Monsanto takes place from noon-2pm followed by the 3rd annual “The Walking Dead Sonora” from 4pm-7:30pm.


Residents from Tuolumne and surrounding counties will come together on “World Food Day” from noon until 2 pm Saturday to “March Against Monsanto,” this time in GMO-Zombie theme.

Since the first worldwide march in May, millions of people concerned by the alleged damage caused by foods, seeds, and chemicals containing Monsanto’s genetically modified (GMO), have put pressure on Congress and grocery stores.

“We just recently had a major victory in this battle due to our massive educational efforts and public outrage. The ‘Monsanto Protection Act’ was allowed to expire in the Senate, thus Monsanto is no longer granted legal immunity from liability for the damage to crops, the environment, and human health caused by their GMO seeds and crops,” said Heather Nordstrom, organizer of the local Sonora march.

All people are welcome to attend the march to show support for food freedom, ask questions, and share ideas on how to shop and eat safely in a world where food containing GMOs make up a large percentage of the current food supply.

“People are hungry for positive action because this issue affects each one of us, and by gathering together to share ideas and resources about how to feed our families healthy food, we make changes faster and more easily. I believe it is most effective to focus on what we want to see, which is a world with food ingredients honestly labeled, and the freedom to choose what we eat. Getting to know our community and local farmers is the best way to create this kind of world,” said Nordstrom.

Activities planned at the march include a GMO-free food drive, and open-mic speakers, and distribution of organic, non-GMO Halloween candy and non-GMO seed packets. Zombie costumes (a playful way to demonstrate the questionable effects of eating GMOs), are welcome.

Then at 4 pm, start looking for hundreds of zombies who will show up for the third annual “Walking Dead Sonora Zombie Walk”.

The event takes place through 7:30pm. The so-called undead will roam up and down Washington Street near the Park.

There will costume contests, a zombie make-up booth, gory games such as the zombie hand toss and the Solluna Roma Belly Dance Troupe will be performing Michael Jackson’s “Thriller” in the park.

All participants are encouraged to bring food and donations for the ATCAA Food Bank and the Humane Society of Tuolumne County. There will be representatives from both organizations present to accept all donations.