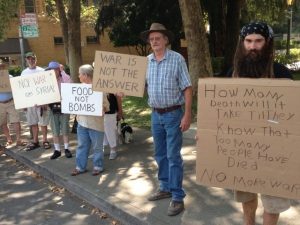 The third anti-war rally this month will take place at Courthouse Park in Sonora on Saturday from 3pm – 5pm.


Freedom, the lead organizer of this weekend’s planned rally, was Friday’s KVML “Newsmaker of the Day”.

Freedom moved to Tuolumne County one year ago and was not around during the regular Thursday afternoon anti-war protests that began shortly after the war in Iraq started. That particular group ended their regular gatherings after January 2009.

“I can’t speak for them, but I’m not partisan,” said Freedom. “The USA needs to stop the wars regardless of who the President is.”

Freedom is concerned that society has become numb to the news of war and deaths.

With recent talk from the Obama Administration of a possible air strike on Syria, Freedom says that now is the time to send a loud message that the USA must stop being the world’s police.

“There are drone strikes that destroy families and there are too many people dying. Over the past decade, the estimated number of deaths including our own US troops and innocent civilians in Pakistan, Yemen, Afghanistan and other places range from 200,000 through 300,000 people,” said Freedom.

When asked if he considers President Obama to be a warmonger despite having won the Nobel Peace Prize in 2009, Freedom replied, “He is the worst kind of warmonger because he hides behind the premise that he is a peaceful guy.”

Freedom expects a wide variety of people to show up at the rally tomorrow. He wants everyone to know that the central theme is “No More War”. He encourages people to bring anti-war signs, as well as items that make noise such as drums, bullhorns, etc.

When asked if he feels that the residents of Tuolumne County agree with his anti-war position, Freedom answered, “I think people here are sick of war. We’ll find out tomorrow with how many people show up at the rally and how many people driving past the park, show their support.”