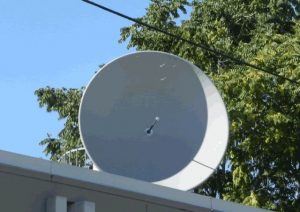 Sonora, CA — The Sonora Planning Commission approved extending a dish in the downtown area as long as certain landscaping requirements are met. The Commission voted unanimously to allow an AT&T owned dish receiver to go up another 12 ft.

The dish is on top of a building at 31 William Street. The reason for the extension request was because trees in the area were blocking the signal to a tower on Bald Mountain. The conditional use permit will allow the microwave monopole to go up from 35 ft. to 47 ft. Also, the current dish will be replaced with the same size dish, but a newer model.
Sonora Community Development Director Rachelle Kellogg says the permit is contingent on landscaping being done at both the dish and tower locations.

“They (company) were supposed to do a better job of landscaping when they put the generator by the tower. Also, they haven’t maintained it so staff requested the commission put a condition on this project. They needed to get the earlier landscaping cleaned up and new landscaping done before we issue permits on a new project. Then we also added the addition of the landscaping along William Street because the planter boxes are in pretty poor condition,” says Kellogg.

The landscaping will consist of trees, shrubs and repairs on an irrigation system.