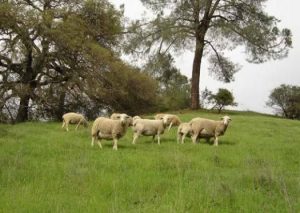 Angels Camp, CA — Angels Camp police are investigating why someone shot and killed a beloved ewe of the Ag Department at Bret Harte High School. The ewe was one of 13 sheep kept in the pastures near the school. Students in the sheep co-op take care of the animals and it was one of them who found the dead ewe on Monday.


Roy Beck, Head of the Agriculture Department at the school says, “There was a single entry and exit wound on the torso of the ewe. I would think it was shot at some distance. I would think from the road or someone drove right up onto the school grounds and shot her. She was up under a shade tree that the sheep like to lie under during the day. “

Beck was at the school on Sunday morning so he believes the shooting had to have happened sometime that night or early Monday morning. Beck’s biggest concern is that a gun was fired so close to the school.

“If we have to put security cameras up, we will. However, we hope we won’t have to do that. We have never had any problems up there. It’s strange. My concern is that we have students that go up and down from our Ag Science Center all day. We have four different co-ops going on there and student safety is a concern. You never know. Was this a one-time thing or was it somebody trying to being malicious? You just don’t know,” says Beck.

Beck stresses police will be making added patrols around the school. The ewe was worth $700 dollars. He hopes the culprit will be caught and forced to pay restitutions.
If you have any information about the shooting call the Angels Camp Police Department at 736-2567, or the Calaveras County Sheriff’s Office at 754-6500.