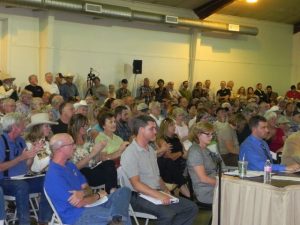 The focus of the hearing, co-hosted by Republican Congressman Devin Nunes of Tulare, was to hear the impacts of potentially granting federal protections to the Sierra Nevada Yellow Legged Frog and the Yosemite Toad. At the beginning of the hearing, Congressman McClintock asked the crowd who was in favor, and who was in opposition, and an overwhelming majority clapped in opposition. Many spoke about potential negative economic impacts that would occur by adding the frog and toad to the Endangered Species List, and others argued that the science regarding impacts is incomplete and inconclusive. There was also testimony about how Endangered Species Protections lead to overcrowded forests.

A panel of speakers gave their opinion about why the designation would have a negative impact on the Sierra Nevada region. They included Tuolumne County Supervisor Randy Hanvelt, Calaveras County Cattleman Kelly Wooster, Siskiyou County leader Mark Baird, Forester Steve Brink and Eldorado County Principal Analyst Mike Applegarth. The lone person speaking about why the federal protections are necessary was Alexandra Pitt, Deputy Regional Director for the US Fish and Wildlife Service. Towards the end of the hearing, several people in attendance took to the microphone to speak about how environmental laws are resulting in people losing jobs and moving out of the community. With a different opinion, one person argued that the forum should have had a more balanced panel of speakers to give different perspectives. Congressman McClintock said that the hearing was designed to hear the opinions of the community, and most all local agencies and municipalities are in opposition.

At the end of the meeting, McClintock stated, “We’re going to compile the testimony and public comments into a record that will be submitted to the House Natural Resources Committee. I hope that it will add to the discussion already going on in Washington over what appears to be a conclusion driven process followed by the Fish and Wildlife Service. Conclusion driven science, is not science.”

Click here to view a short video of the overflow crowd.