Over $3.6 Million In Street Value Seized In Three Pot Raids 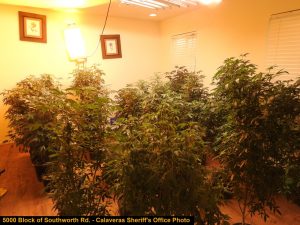 Calaveras County, CA – Raids on three properties in three areas of Calaveras County resulted in over $3.6 million in pot seized, six guns and five arrests were made.

Two of the searches happened on the same day, the third was conducted a week earlier. The warrants for illegal marijuana cultivation were served by the Calaveras County Sheriff’s Office Marijuana Enforcement Unit with the first at the end of last month. The unit found a home that had been converted into an indoor marijuana cultivation site in the 2000 block of Moro Road in San Andreas. Inside deputies found 741 growing marijuana plants and 52 pounds of processed marijuana with sheriff’s officials estimating a value exceeding $549,250.

Five firearms and evidence of marijuana sales were also discovered. Two suspects, Man Yee Chan, 44, of San Francisco, and Wei Ren Huang, 48, of San Andreas, were arrested at the scene on several drug-related charges. The scene was also “red-tagged” due to electrical hazards, substandard conditions, and unpermitted additions to the residence.

The two other searches were made last Tuesday, with the first one at a residence located in the 5000 block of McCauley Road in Valley Springs. A detached metal shop on the property had been converted into a pot grow. Seized were 2,511 growing marijuana plants and 222 pounds of processed weed. The estimated value of the seized marijuana is more than $1,632,150, according to sheriff’s officials. Arrested on the scene was Yen Hsiang Yang, 30, of Valley Springs. This property also had red tagged for county code violations.

The second search that day took place in the 5000 block of Southworth Road in Burson. Deputies seized a firearm and 2,298 growing marijuana plants with an estimated value of over 1,493,700. The cultivation was going on in a large metal shop shed and inside the residence. At the site, two suspects, Jose Feliciano Escarcega-Barajas, 33, of Burson, and Rene Redondo-Ortiz, 22, of Burson, were arrested at the scene.

Investigations into these three illegal grows are ongoing. Report illegal marijuana operations to the sheriff’s Anonymous Marijuana Tip Line at (209) 754-6870.