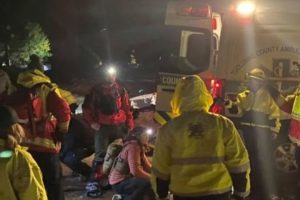 Pinecrest, CA – Three adult hikers escaped without serious injuries after being stranded at Pinecrest Lake for seven hours in the deep cold snow.

A call came into the Tuolumne County Fire Department around 6:30 p.m. last Saturday reporting a possible medical aid at the back of the lake. Two Station 55 Pinecrest volunteer firefighters responded while also requesting additional backup. After trudging through the nearly eight feet of snow and rugged terrain for about an hour, they found the freezing hikers who were suffering from exhaustion and weather-related injuries. The patients were immediately wrapped in emergency blankets and given food and water. A short time later, firefighters from the Mi Wuk Sugar Pine with more provision that included heat packs and ignited a fire to warm the hikers.

Then the Tuolumne County Sheriff’s Search and Rescue (SAR) units made it to the scene and distributed needed gear, clothing, and more water to victims. Four hours from the call for help, the patients were evacuated after being loaded on SAR equipment. Two hours after, around 12:30 a.m., that the patients were checked out by EMTs in an ambulance waiting at the pier.  Noting that the situation could have turned out deadly, Tuolumne fire officials praised the teamwork, thinking ahead, and good communication by emergency responders. They also provided these tips for hikers: