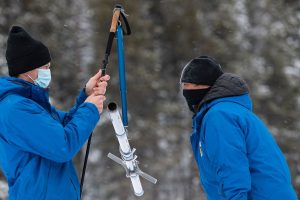 Sonora, CA – While some areas in the Mother Lode are still digging out from last week’s storms, California Department of Water Resources (DWR) officials say the significant dump of snow was not enough to fully compensate for a dry start to winter.

At its second manual snowpack reading on Wednesday, DWR officials reported the water content was 70% of average to date statewide and 45% of the April 1 average, when the snowpack is usually deepest and has the highest water content.

The water supply outlook is much better “but we’re still nowhere near out of the woods,” stated Sean de Guzman, chief of the Department of Water Resources’ snow surveys and water supply forecasting section.

The manual measurement was taken at Phillips Station, south of Lake Tahoe, as shown in the picture in the image box and video. It found 63 inches of snow and a water content of 17 inches, which was 93% of average to date and 68% of the average on April 1.

Precipitation statewide during October, November and December was only 39% of average. DWR attributes that to a Pacific Ocean La Nina that is pushing many storms into the Pacific Northwest and British Columbia. The water content of the snowpack statewide was only about half of average on Dec. 30.

“To make up for those early dry months we’ll need multiple days of above-average precipitation. At this point, it looks like we’re just going to continue to be chasing average conditions for the foreseeable future,” forecast de Guzman. However, he remains hopeful, adding, “As California continues to experience what appears to be a second straight year of below-average rain and snow, remember that February is still one of our three wettest months of the year and that could really help us make up a lot of that deficit.”

Today the U.S. Drought Monitor reported the recent powerful storms eased state drought conditions with the Sierra Nevada reduced from severe to moderate drought. They found overall, 85.9% of the state remained in moderate, severe, extreme, or exceptional drought, down from more than 95% in the week-earlier report as can be viewed below: 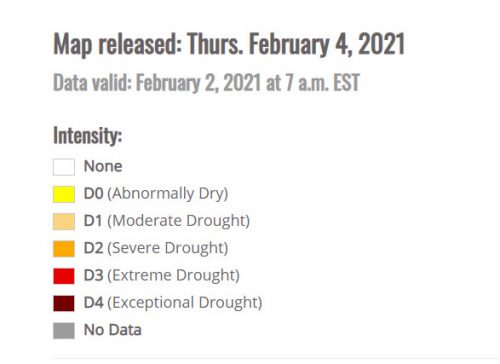 The Sierra snowpack typically supplies about 30% of California’s water needs as the snow melts into reservoirs. The below graphic has the current reservoir levels.

The bottom line according to DWR officials is that residents should use water wisely, and always conserve it.