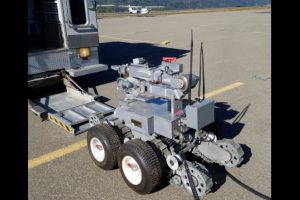 Campo Seco, CA – A pipe bomb was found in the Valley Springs area of Calaveras County last month, and whoever left it is still on the loose.

Luckily, the bomb did not explode before the Calaveras County Bomb Squad could arrive and secure the device. It was around 10:45 a.m. on January 23rd when sheriff’s officials got a call from an East Bay Municipal District Employee of a possible “pipe bomb” in the 2000 block of Campo Seco Road in Campo Seco placed near a portable restroom.

As deputies rushed to the scene, they were joined by the sheriff’s Explosive Ordinance Disposal Unit.  They quickly closed off the area and located the device that appeared to be an air tank commonly used in paintball sports. Sheriff’s officials described the device as about 9 inches long and about 2 inches in diameter. It was filled with gun powder and there was a fuse coming out of the neck. They add that it appeared to have failed to detonate as designed but did not release the reason for the device’s malfunction.

Bomb squad investigators determined that if it had gone off, it “could have caused serious injury.” Sheriff’s officials add that this is an ongoing investigation, and no further information is being released at this time. Anyone with any information regarding the devices or a possible suspect are asked to call the sheriff’s department at 209-754-6500.

Of note, last year, the unit responded to 19 calls for service involving explosive items, according to sheriff’s officials. No pictures of the bomb or the scene were released. However, the picture in the image box of a specialized robot, which can be used to examine, transport, or render explosives safe was. It is one of the recent pieces of equipment the unit has received from federal agencies like the FBI. It is unclear if it was used in this incident.