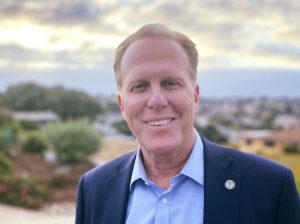 Sacramento, CA — Former San Diego Mayor Kevin Faulconer says he is planning to run against Governor Gavin Newsom if there is a 2021 recall election, and if not, will wait until the 2022 General Election.

The Republican announced plans to run for Governor in a video he released yesterday. He is the first major Republican to formally announce his intentions to run as signatures are being gathered for a recall initiative against Newsom. In the video, Faulconer criticized Newsom’s handling of high-profile issues like COVID-19, electricity infrastructure, homelessness and unemployment fraud.

Faulconer, 54, is considered to be a centrist Republican.

When questioned about the recall effort, Newsom has declined to comment, and stated that he is more concerned about things like vaccine distribution.

Democrats have a roughly 2-1 advantage in California when it comes to party affiliation.