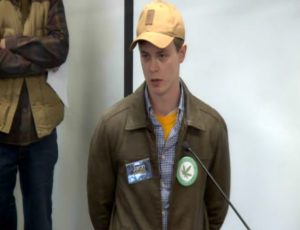 The District 5 Supervisor was Wednesday’s KVML “Newsmaker of the Day”.

Brandon shed some light on a proposal to move the ‘Camp Hope’ homeless camp, which is located on W. Stockton St. in Sonora, towards the Harvard Mine Pit area in Jamestown. The proposal itself did not come from Brandon. Here is an edited transcript from Supervisor Brandon’s Town Hall meeting:

“I just got out from a meeting that was happening in Jamestown talking about homelessness. I’ll give a brief update of what kind of came out of that meeting. About, I’d say probably 70.. maybe 100… people were there discussing a few different things. So I didn’t organize that meeting but I am actually really happy that it happened.

When it comes down to it, what we talked about is that there is a strong potential that we might have to see Camp Hope moved to another location. And there is legal requirements of what needs to be provided for a new spot, what happens if they camp on a public property, limitations on that. Some of the reasons why we see in cities that they are unable to get them off sidewalks or other places. It’s a big complicated issue. It’s something that I’m coming into after it’s been discussed or you know quite a few amount of time.

But one of the most important things to me is inviting in the public and having the humility to say, “I don’t know all the answers to this and it’s a huge issue and that we need to let you know even when it’s ugly, when it doesn’t look nice, when we don’t have this clean solution, public opinion is valuable”.

I made a post about a week ago talking about the situation that they were looking at least at the site proposed. This is something I’ve known for quite a while, at the Harvard Mine Pit, that there is some county property there. This is an issue that I’ve been pushing on for months. And it’s been a “wait until you’re fully in and sworn in”, “wait till the orientation”, “wait till the workshop” and I believe that the people of our community need to know, they need to understand what is happening and they need to be invited, because I don’t think this is the right location for a lot of reasons.

I’m not a NIMBY person by heart, but I look at this and I don’t think it should be the only one being considered. And so what I’m asking is for the community to give input. What other locations could we put something like this? What are some of the things driving this issue in our community and how can we come together on it? We have had the City and the County and a lot of people say, “It’s ugly. It’s hairy. It’s expensive. it’s difficult.” And so nobody wants to take lead and say it’s a problem. Nobody actually wants to create the Committee to run it and address it. And what that has left us, is with 10 or 20 years of it just steadily getting.. getting worse and some of these becoming kind of time bomb issues.

We need a long-term solution and we also need one that will satisfy what would be the short term. We know that that camp property was previously the Rotelli burn dump. And there could be issues potentially with that. We know that potentially they had offered state properties in one of the Governors Orders several months ago, that there is BLM lands, that there might even be private landowners or nonprofits that we can partner with for a solution.

That’s extremely important that we explore all those options and we do so with the public. I don’t think they’re hiding anything on this. I just think when they think transparency it’s often times, ‘What is legally transparent?” “What do I have to do?” and not “How do I maximize how much people in the community know about this issue?”.

What this will take, I think, is having people from the community call in to the Board meetings. It’s every other Tuesday 9 AM. You get three minutes. Talk about it. Give a personal story of how this could impact you. What you would like the County to do.

Talk to the other elected officials. We have judges, we have sheriffs about what they’re doing to handle this issue. Show support for what my proposal has been. It’s to create a standing committee on homelessness with our Homelessness Coordinator Kellae Brown taking lead, but also to put a County Supervisor on it to support that effort and see what Grants can we get, what partnerships can we build.

This is something I was hoping would be on the meeting agenda for last time. Unfortunately, it did not make it. This is something we cannot afford to keep pushing and kicking the can two weeks down the road. Which is why I’m really happy we had a long community discussion. Almost 2 hours of questions and answers. And again, it’s a hard issue.

I ran for this job willing to be criticized for it. I think some people thought this is a proposal I was making or a suggestion or an idea. It’s not. But at the same point, the Board operates as an entity. It doesn’t require consensus and any one Supervisor does not have the filibuster veto authority.

We’re gonna need the community to participate in this, to be able to… I think… find a better solution than what we have.”