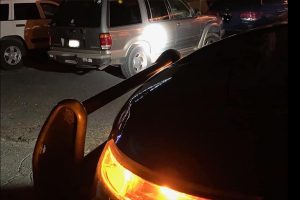 Sonora, CA – A neighbor noticed a man rifling through mailboxes and throwing the paper onto the street in a local subdivision, finding the man’s behavior suspicious they called 911.

When Tuolumne County Sheriff’s deputies responded to the Willow Springs Subdivision early in the morning recently, they spotted a parked Ford Explorer with its dome light on. When they went to check it out, they found, 38-year-old Seth Saladopoor of Sonora, behind the wheel. A records check showed he was on searchable probation.

A look inside the SUV uncovered several pieces of mail belonging to various people. Some opened mail found on the front seat included 14 different checks totaling over $14,000. Besides the stolen mail, deputies also discovered about two grams of methamphetamine, .5 grams of heroin and drug paraphernalia.

Saladopoor was arrested without incident for felony receiving/possessing stolen property, mail theft, possession of controlled substances, and drug paraphernalia. His bail was set at $10,000.