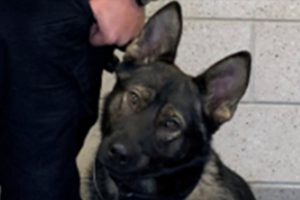 San Andreas, CA – Calaveras County received a crime-busting Christmas gift that will keep on giving for years to come and not strap the department’s budget.

The new four-legged deputy Storm, an 18-month-old German Shepard, is pictured in the image box with his new handler, Deputy Michael Jericoff. Sheriff’s officials say that according to his passport, Deputy Storm is a former resident of the Netherlands.

With this addition, the patrol division is equipped with two certified canine teams. The other is Corporal Moser and K9 Nox. They also specialized in suspect apprehension, but Nox’s nose sniffs out illegal drugs like cocaine, heroin, and methamphetamine. Sheriff’s officials say the teams will work overlapping shifts, making them available every day of the week.

The cost of this new K9 team will not break the budget either since the Calaveras County Canine Unit orchestrated a T-shirt fundraiser in coordination with non-profit The Friends of Calaveras Sheriff’s Office to lessen the impact. The total cost was about $16,000 with Storm costing the sheriff’s half of that expense.

Of note, Deputy Jericoff brings experience in canine handling, having previously worked as a canine trainer for a vendor in the central valley that specialized in police canines. He has been working with Calaveras Sheriff’s Office since February 2019.