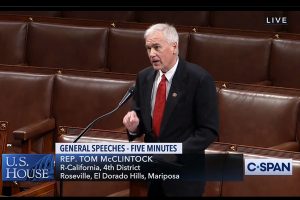 Sonora, CA – When the $900 billion COVID-19 relief bill was approved in the US Congress, Mother Lode representative Tom McClintock was one of the no votes. He makes this argument, “The only genuine relief from the Covid lockdowns is to end the Covid lockdowns.  Why is that so hard for some people to understand?”

McClintock adds the bill is inequitable and will have to be repaid by future earnings, which he says will make the post-lockdown recovery more prolonged.

Below is the entire speech provided by Congressman McClintock and delivered on the House floor:

The Only Relief from Lockdowns is to End Them

Every American needs to see Angela Marsden’s tearful video as she pours out her frustrations as a small restaurant owner in Los Angeles.  Forced to drastically curtail her business during California’s brutal shutdowns, she took out an $80,000 loan to meet all the expensive requirements to move her dining outside and salvage what was left of her life’s work.  Instead, authorities arbitrarily changed the rules, and shut her down again – a death sentence for her ten-year-old restaurant.   Yet the same authorities permitted a film production company to offer the very same outdoor dining across the very same parking lot the day she had to close her business.

“I’m losing everything,” she says through her tears, “Everything I own is being taken away from me.”

In Staten Island, police hauled a restaurant owner away in handcuffs for desperately trying to re-open his establishment just across the tracks from other restaurants where dining was allowed under precisely the same conditions.

When asked to explain these capricious standards, California Gov. Gavin Newsom smarmed, “I’m deeply empathetic.”  That must be a load off their minds.

The Fifth Amendment in our Bill of Rights specifically protects Americans from being deprived of life, liberty or property without due process of law.  Where are those rights today?

Congress is now discussing how to provide relief for the thousands of small business owners, their employees, and the families that depend on them, who have been crushed by these reckless edicts.  As usual, politicians measure their empathy by how much they’re willing to spend of other people’s money.  But the fine point of the matter is this: government cannot support the economy for any significant period of time because government does not finance the economy.  The economy finances the government – and when you shut down the economy, you shut down the revenues that go to government.

By now, it should be obvious that the lockdowns have failed to contain this virus.  After nine months of this unprecedented experiment in social engineering, the virus continues to spread.  Common sense should tell us that the more infectious a virus and the deeper it has already penetrated into a population, the less effective mass isolation will be.

The plight of Angela Marsden and countless victims of these policies tell us clearly what we are very effectively accomplishing: we are destroying our society.  We have set in motion countless, avoidable deaths by suicide, drug and alcohol abuse, domestic violence, deferred health treatments and health screenings and poverty that will stalk us for many years to come.  We have cost our youth a year of their educations.

Nearly half of American retailers say they are now in imminent danger of permanently closing.  Forbes magazine reports (quote) “the number one worry on most small business owners’ minds now is the threat of more government mandated business closures.”  Eleven million Americans who had jobs in February don’t have them today.

Modern science and its many breakthroughs in immunology, epidemiology and virology has given us advanced treatments and vaccines unparalleled in human history.  But science is grotesquely incompetent to reorder human societies or to change the laws of human nature.  Nor does it give officials the omniscience to know what is best for every person in every circumstance.  Nor does it give them the right to wantonly destroy people’s lives and livelihoods.  After all, medicine’s most ancient command is “First, do no harm.”

We have arbitrarily and indiscriminately destroyed the life’s work and life’s dreams of millions of Americans like Angela Marsden.  We have made the most sacred right of Americans to “life, liberty and the pursuit of happiness,” into a hollow and bitter mockery.

The American people don’t need the governor’s empathy and they don’t need politicians’ handouts.  They need a government that protects their right to make a living and to lead their own lives according to their own best judgment.  They need their Bill of Rights back.  And above all, they need their freedom back.