Sonora Burglar Used Van As A Battering Ram For Break-ins 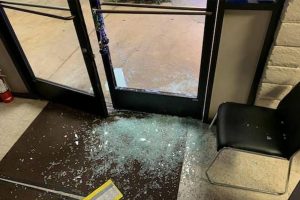 The first call came in early Monday morning to Tuolumne County Sheriff’s dispatch regarding an alarm sounding at the Sears Hometown Store at the Mono Village Center off Mono Way in East Sonora. Once on scene, deputies discovered that the glass had been broken out of both front doors to the store. A check of security camera footage showed a utility van ram right through those doors. With the driver, 32-year-old Matthew Williams of Sonora, running into the store and stealing over $1,000 worth of tools.

A second call came into dispatch a short while later describing a similar burglary at the Junction Shopping Center, also off Mono Way. In this incident, investigators say Williams rammed his van into a shed behind the center to burglarize it, causing thousands of dollars of damage to the shed.

There was a break in the case when an off-duty deputy noticed the damaged van in the Walmart parking lot that evening. Inside were the tools taken in the Sears burglary. Arriving deputies arrested   Williams outside the Staples store without incident.

Williams was arrested for burglary, attempted burglary, an out of county felony warrant for failing to appear in court for a burglary charge, and a misdemeanor vandalism warrant.