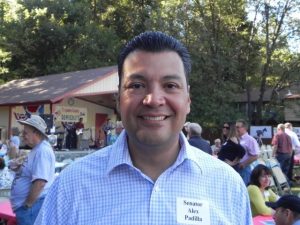 Sacramento, CA — California’s Secretary of State has been tappd to replace Vice-President Elect Kamala Harris in the US Senate.

Newsom says, “The son of Mexican immigrants —  a cook and house cleaner — Alex Padilla worked his way from humble beginnings to the halls of MIT, the Los Angeles City Council and the State Senate, and has become a national defender of voting rights as California’s Secretary of State. Now, he will serve in the halls of our nation’s Capitol as California’s next United States Senator, the first Latino to hold this office.”

Padilla responds to the news, “I am honored and humbled by the trust placed in me by Governor Newsom, and I intend to work each and every day to honor that trust and deliver for all Californians.”

Padilla and his wife Angela, a mental health advocate, and their three sons, live in the San Fernando Valley.

We reported on Padilla visiting Twain Harte as a candidate for Secretary of State in 2013, and you can find the earlier story by clicking here.

The term of outgoing Senator Harris runs through 2024.