No Fine For Event At Sportsman Bar 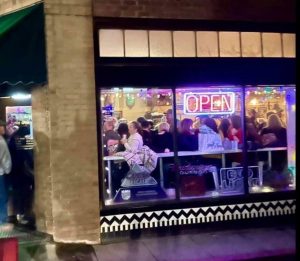 Sonora, Ca — After discussing the matter for about four hours last night, the Sonora City Council decided against issuing a $250 fine to the Sportsman Bar following an event held earlier this month.

Considering it a one-off gathering, a celebration of life for a local resident, the council is instead issuing a warning to the business. It was noted that the bar has been closed throughout the pandemic, and there had not been any issues previously. The event held at the bar helped raise money for the children of the woman who passed away, a family member of one of the owners.

When the city passed a COVID-19 regulatory ordinance this past April, the council indicated it would warn businesses before moving to a $250 fine. However, city staff and the public health department recommended the fine because the violation was considered obvious and “egregious” as people were packed inside and many were not wearing masks.

Many were passionate on both sides during the public comment period. A common concern raised was that big box stores, like Walmart, have large crowds, and often times shoppers are not wearing masks.

On the topic of COVID-19, Mayor Matt Hawkins argued that it is the most controversial issue, with everyone divided, since the Civil War.

All of the council members were sympathetic to arguments raised on both sides. Mayor Hawkins and Vice Mayor Mark Plummer argued that the Sportsman should first receive a warning instead of a fine. Councilmembers Colette Such and Ann Segerstrom were giving indications that they were leaning towards supporting the $250 fine.

Councilmember Jim Garaventa stated that the vote appeared to be split, and his action would sway it one way or the other. He stated that he was initially leaning towards the fine, but after hearing all of the issues brought up during public comment, and that the city earlier stated that they would warn businesses before issuing a fine, he chose to go the warning route.

In the end, there was no motion by any of the council members to approve the staff recommended fine.