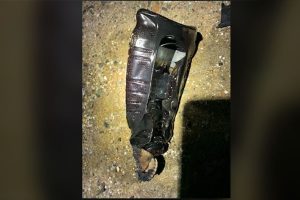 Jamestown, CA – A Jamestown resident could not believe what they were witnessing as they spotted a woman trying to light their neighbor’s vehicle on fire.

The call came into Tuolumne County Sheriff’s dispatch Monday night reporting an attempted vehicle arson at a home on Fourth Avenue. Once on the scene, deputies noticed a melted plastic bottle, as seen in the image box, on the ground underneath an SUV parked on the street. Further investigation determined it was a Molotov cocktail.

The witness alerted the owner of the vehicle and they used a garden hose to douse the flames before they set the  SUV or nearby grass on fire. The woman who was seen allegedly lighting the fire was identified as 41-year-old Samantha Good of Jamestown. She was found at her house and taken into custody without incident for attempted arson. Sheriff’s officials say that the motives surrounding the attempted arson are not clear at this time. Good’s bail was set at $30,000.