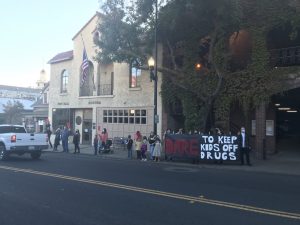 Sonora, CA — During a five-hour marathon meeting, with around 130 people joining via Zoom, the Sonora City Council passed an ordinance to start allowing recreational marijuana sales in the city.

For the past couple of years, Sonora has had a marijuana program that doles out two permits for medicinal sales, and it is now being expanded to three permits allowing for either medicinal or recreational sales.

City Administrator Mary Rose Rutikanga stated that related changes to the ordinance code are estimated to bring the city between $350,000-$400,000 in new revenue.

Over 50 people spoke against the proposal arguing that marijuana is a gateway drug, it damages young minds, leads to more fatal accidents, and will create an undesirable element in the city. There was also a rally outside city hall, against the ordinance, attended by District Three Tuolumne County Supervisor Anaiah Kirk, and others.

During the meeting, over a dozen people also spoke in favor of the expansion. Some argued that trauma is the real gateway drug, and not marijuana.

Mayor Matt Hawkins commented at the conclusion, “My biggest thing is the freedom part of it. It has already passed into law (recreational marijuana use in California), it is going to be heavily regulated, and pretty much everything is going to be governed with a development agreement.”

Councilmember Colette Such stated she would only support the proposal if the fellow council members would agree to charge applicants to help fund education programs, or things like a school resource officer. She gained a verbal consensus among fellow members.