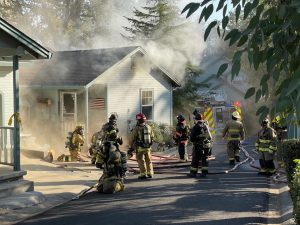 Update at 3:45 p.m.:  Calaveras County Sheriff’s spokesperson Sgt. Greg Stark tells Clarke Broadcasting that the house fire in the 1200 block of Annalee Court near Annalee Drive, between Highways 49 and 4 in Angels Camp has been contained. He adds that all evacuation orders have been lifted and residents can return to their homes. There is no word on the damage to the home or if any residents were home at the time the flames broke out. The fire did not spread to any nearby vegetation.

A fire crew will remain on the scene mopping up for the next couple of hours. What ignited the blaze remains under investigation.

A special thanks to our community partner Leland Giorgi for sending in pictures.

Original post at 2:55 p.m.: Angels Camp, CA — Columbia aircraft and ground crews are on the scene of a structure fire in Angels Camp.

CAL Fire reports the flames broke out in a home in the 1200 block of Annalee Court near Annalee Drive, between Highways 49 and 4. A caller reported the blaze to dispatch stating that they could see flames shooting out of a window of the house. There is no word as to whether any residents were home when the fire ignited, but residents in nearby homes have been evacuated by Calaveras County Sheriff’s Deputies as a safety precaution. The flames have not spread to any vegetation at this time. An update will be provided as soon as new information comes into the newsroom.

Thanks to community news partner Leland Giorgi for the photos.