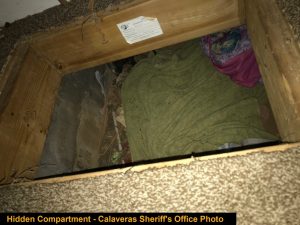 West Point, CA — Two people were booked into Calaveras County Jail on $100,000 bail, and a third person was cited and released, following the disappearance of 14-year-old Kaylee Arney.

We reported late last week that the missing teen was found safe in West Point, but limited details were made available at the time.

Her family stated she was last seen at a friend’s house in the West Point area. When sheriff’s office officials went to the home, they were told that she was gone, and her whereabouts were unknown. In the days that followed, detectives investigated the case by contacting her friends, known associates, and scouring social media. They also conducted a search warrant to retrieve information from her cellular phone. The Sheriff’s Office received information leading them to believe that she was still in the West Point home from which she was reported missing from on October 22. Detectives received a search warrant, went to the residence, and were met by the occupants in the front yard, who insisted that Kaylee was not inside.

Deputies went in and found her intentionally hiding between the corners of two adjoining closets. They also located a hidden trapdoor that led to a makeshift sleeping area on a dirt floor beneath the house. They found bedding and her cell phone.

20-year-old Isaiah Haggard and 41-year-old Annie Peral Abernathy, both of West Point, were arrested for providing false information to peace officers, contributing to the delinquency of a minor, and felony child endangerment. They were booked on $100,000 bail. A third suspect, 34-year-old Jose Tinocopureco of West Point, was cited with a misdemeanor related to providing false evidence and contributing to the delinquency of a minor.

Sheriff Rick DiBasilio has put out a statement, “The Calaveras County Sheriff’s Office would like to thank everyone who helped locate Kaylee. The investigation was assisted greatly by a partnership with members of the community. As a law enforcement agency, we feel very fortunate to have such a strong working relationship with so many citizens. We are extremely thankful that Kaylee was returned to her parents and hope the best for her in the future.”

Aspects of the investigation are still ongoing.