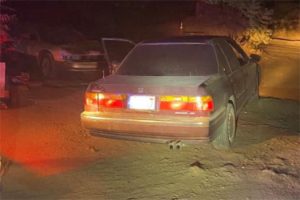 Sonora, CA – An early morning highspeed chase from East Sonora to Sonora involved a stolen car with the thief nearly crashing into a patrol vehicle.

Tuolumne County Sheriff’s Deputies on patrol just before 3 a.m. on Sunday spied a suspicious car pulling into a parking space in front of a closed business at the Junction Shopping Center on Mono Way in East Sonora. When deputies, in separate vehicles, drove up to investigate, the driver, 24-year-old Joshua Underwood of Stockton, hit the gas. While flying past one of the patrol vehicles, he nearly hit it head-on, according to sheriff’s officials.

Deputies pursued Underwood along Highway 108 at speeds topping 80 mph until he turned onto Stockton Road. Then, he pulled onto a dirt road at Camp Hope and ditched the vehicle. With deputies hot on his heels, Underwood was quickly apprehending.

Sheriff’s officials report the car had been reported stolen out of Manteca. Inside, deputies found burglary tools. Underwood was arrested for stolen vehicle, felony evading, resisting arrest, possession of burglary tools, and operating a motor vehicle without a license. His bail was set at $50,000.