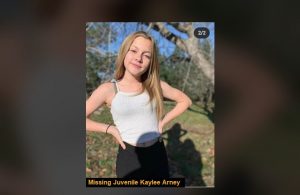 She was last seen at a friend’s home and left before her grandmother arrived to pick her up. Anyone with information on Kaylee Arney’s whereabouts should contact the sheriff’s office at 209-754-6500. She is a 14-year-old girl, 4’11”, and around 120 pounds. The sheriff’s office continues to investigate all leads. There is no indication at this time that foul play is involved, and she is considered a possible runaway juvenile.