Valley Springs Store Prohibited From Selling Alcohol For Over A Month 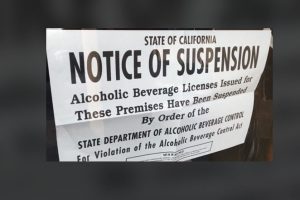 Valley Springs, CA – The “Notice of Suspension” sign pictured in the image box has been posted on the front door at the Dollar Plus Store in Valley Springs after it was slapped with two suspension orders.

The notice prohibits the store, located at 54 California Street, from selling alcohol for the next 35 days.  The California Department of Alcoholic Beverage Control (ABC) filed two separate accusations against the store for illegal activity.

The first accusation was the result of a sting operation where agents from the Department’s Special Operations Unit sold purportedly stolen property to a store clerk on five separate occasions in January and February of this year. During that time, they also discovered illegal drug paraphernalia being sold at the store. The second, came after agents from the Stockton District determined that a clerk sold alcohol to a minor in August.

“Too many Californians are killed or injured in alcohol-related crashes and incidents and hopefully education, prevention, and enforcement efforts will prevent those tragedies from occurring,” said ABC Director Eric Hirata.

ABC encourages all licensed sellers to sign up for its free Licensee Education on Alcohol and Drugs (LEAD) training offered online. ABC is a Department of the Business, Consumer Services and Housing Agency.