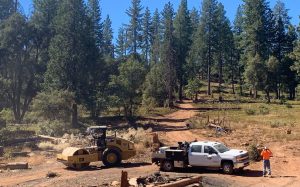 Tuolumne, CA — A recently formed local non-profit has now successfully fast-tracked the repair of an emergency evacuation route for the Ponderosa Hills Community.

We reported earlier that Tuolumne Safe was formed in September to raise money to finish repairs needed on Mt. Provo Road. By a couple of weeks later, the organization had received $14,000 in donations, with help from the Sonora Area Foundation, TuCare and businesses and local residents.

The organization had also received $11,500 worth of donated rock from Blue Mountain Minerals.

Yesterday the work was completed, and Mt. Provo Road is now a fully operational escape route. Board member for Tuolumne Safe, Mel Kirk, states, “Overall completion of the project was made possible via collaboration of government entities and private enterprise. Special thanks for today’s work goes to Martin Reynolds from Easy Street Gravel for grading the road, Levi Low for helping flag and mark the road, SMCI for donating a water truck and compactor, and Timberline Environmental Services for donating a road grader.”

Click on the image box to view some photos.

Tuolumne Safe plans to do other public safety projects in the future.