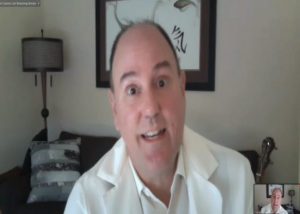 Upon announcing plans to resign this coming Friday, Dr. Kelaita delivered his final COVID-19 presentation to the board of supervisors this morning. He earlier cited the difficulties of providing health information during the current political climate, as the main part of his reason for departing.

During the presentation, he noted that it is positive that Calaveras has now moved down to the orange moderate risk tier when it comes to state business regulations. He noted concern, however, that there could be a potential spike in cases this winter during the traditional flu season. He encouraged everyone to take part in a free drive-thru flu shot clinic this Thursday, October 15, from 9am-4pm at the Calaveras High School in San Andreas.

Regarding a COVID-19 vaccine, Dr. Kelaita says, “Preliminary planning activities are underway by public health in preparation of distribution of the COVID-19 vaccine when it becomes available. This is going to be in our community through mass vaccination clinics. We don’t know the timeframe. I don’t predict that it is going to be until early 2021.”

He also noted that the state has updated its guidance regarding social get-togethers. It is now okay to do so, outside, with three households, and safety measures like proper hygiene and face coverings.

At the end of the presentation, all five board members thanked Dr. Kelaita for his 20 years of service. Supervisors Benjamin Stopper and Dennis Mills both noted that they have had their disagreements with him, but praised his service to the county.

Dr. Kelaiita responded, “I think several supervisors have put it very well that we haven’t seen eye to eye on some of these issues, but I appreciate the board’s listening and engagements during this pandemic and everyone doing what they think is best to protect the health of this community.”

He noted that some residents have directed negativity towards him during the past six months, but says it is a minority in the community, and that the majority is “supportive of science and reason.”

He concluded to the board, “I encourage you to listen to those voices, and not the ones that make the most noise, or the lunatic fringe.”

It was also stated at the meeting that the Health and Human Services Department hopes to have an agreement lined up by midweek for interim Health Officer services, and it will be considered by the board at its next meeting.

At the end, Dr. Kelaita was given a coffee mug from board chair Merita Callaway with his picture on it, and the back had messages about wearing a mask and social distancing.