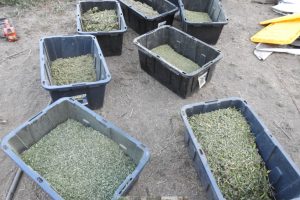 Calaveras County, CA – One property in Railroad Flat has been the target of five raids.

In the last two days of September, the Calaveras County Sheriff’s Office Marijuana Enforcement Unit served two unrelated search warrants for illegal marijuana cultivation. The first was in the 400 block of Blossom Lane in Railroad Flat and the second was in the 7000 block of Old Miners Way in Mountain Ranch.

The combined searches netted 460 marijuana plants and 78 pounds of processed pot at an estimated value of over $375,000. This was the fifth time the Blossom Lane site was raided in the past three years.

One suspect, 40-year-old William Chamberlain of Corning, which is about a hundred miles north of Sacramento, was arrested at the Mountain Ranch location. He faces possible illegal marijuana cultivation, possession of marijuana for sale, and operating a drug house.

Anyone that suspects an illegal grow in the county should contact the sheriff’s anonymous marijuana tip line at (209) 754-6870.