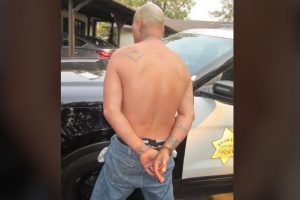 Columbia, CA – While serving a probation search on a Columbia home, deputies discovered another type of theft going on at the property.

On Thursday morning, Calaveras Sheriff’s deputies and the High-Risk Supervision Team probation officers raided a home finding 56-year-old Thoris Foster of Columbia and 42-year-old William Short of Manteca inside along with two others. During a search of the residence, they found several packages of methamphetamine with a combined total of over a quarter of an ounce. Also, seized was $1,500 in cash, drug packaging materials and paraphernalia.

As they continued to carry out the raid, another crime was uncovered, utility theft. Sheriff’s officials explained that a “PG&E meter to the breaker box had been removed and the power was being supplied to the house illegally.”

Foster was arrested for possession of methamphetamine for sale, operating a drug house, and theft of utility services. Short was arrested for possession of methamphetamine. He also had a felony warrant out for his arrest, but no further information was provided. The other individuals in the home were wanted on misdemeanor charges. They were issued citations and then released.