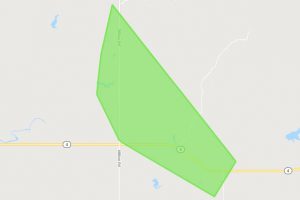 Update at 2:30 p.m.: PG&E has pushed back the repair time for the remaining 34 customers in the area of Highway 4 near Milton Road after a vehicle smashed into a power pole sparking the Snow Fire. It has been contained at 40 acres. The utility had posted a restoration time of 2:45 p.m., but those customers will have to wait for at least another five hours for their lights to go back on, as the new time is 8:30 p.m.

Update at 1:45 p.m.: PG&E updates that the power outage that originally impacted 207 customers has dropped to 34 and the restoration time remains 2:45 p.m. The utility reports that the outage is a result of a vehicle smashing into a power pole. Cal Fire crews remain on the scene working towards full containment and mopping up for the next couple of hours.

Update at 12:12pm written by BJ Hansen: CAL Fire spokesperson Emily Kilgore reports that the forward progress has been stopped on the Snow Fire near the Stanislaus and Calaveras County line. It was ignited by a vehicle accident on Highway 4 near Milton Road. It quickly burned an estimated 40 acres. Around 207 PG&E customers nearby are without electricity. Be prepared for continued activity in the area.

Update at 12:03pm: 207 PG&E customers are without electricity near the Snow Fire situated near the Calaveras and Stanislaus county line in the area of Highway 4 and Milton Road. The latest size estimate remains five acres.

Original story posted at 11:55am: Copperopolis, CA — Air and ground fire resources are responding to an incident on Highway 4 near Milton Road close to the Calaveras and Stanislaus county line.

A vehicle accident has reportedly ignited a fire. Be prepared for activity in the area. The Snow Fire is five acres and moving at a moderate rate of spread, according to CAL Fire. Some power lines are down in the area.