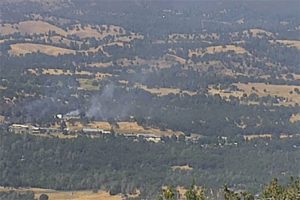 Update 4:05 p.m.: CAL Fire dispatch reports that crews have contained a 13-acre grass fire burning behind the Travelodge Motel on Highway 49 in the Angels Camp area of Calaveras County. Unfortunately, they relay that one structure was destroyed by the flames, but they did not know what type of building; only relaying that the motel was not involved in the blaze. Also, there were no evacuations or injuries reported. All Columbia aircraft have returned to base. A small crew will remain on scene mopping up and checking for hot spots for the next couple of hours. What ignited the flames is under investigation.

Update at 3:40: CAL Fire dispatch relays that crews are making progress on a 10 to 15-acre grass fire burning near the Travelodge Motel on Highway 49 in the Angels Camp area of Calaveras County. The pictures in the image box show how the plumes of smoke had dissipated. They add that the Columbia air tankers have reloaded with retardant, but have been put on hold. There was no update available on whether structures were still threatened.

Original post at 3:10 p.m.: Angels Camp, CA — Columbia aircraft and ground crews are battling a vegetation fire near the Travelodge Motel on Highway 49 in the Angels Camp area of Calaveras County.

CAL Fire reports that the flames broke out in some grass and the fire has grown to 10 to 15 acres in size. They add that several structures are threatened, but it is unclear if one is the motel and whether any evacuations have taken place.

Currently, traffic is still moving in both directions on the highway. An update will be provided as soon as new information comes into the newsroom.