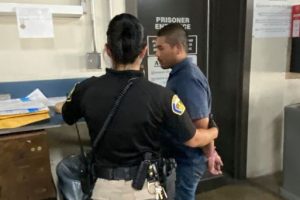 Sonora, CA – An off-duty Sonora Police Officer was dragged from a vehicle when a suspect accused of shoplifting tried to escape arrest.

The suspect 29-year-old Justine Olkerill of Twain Harte was approached by a store employee after leaving a shop in the 600 block of South Washington Street on Wednesday afternoon. While confronting Olkerill, the worker recognized a man in civilian clothes nearby to be a cop and call to him for help. Police report that he identified himself as an officer and showed his credentials as well.

Refusing to follow the officer’s commands, Olkerill began reaching inside of the vehicle. It was then that his companion, 22-year-old Michael Martin of Twain Harte, exited the store and joined in, trying to step in between the officer and Olkerill, according to police.

Suddenly, a struggle broke out between the officer and Olkerill, who was able to jump behind the wheel of the vehicle and started backing up. With the driver’s side door still open, the officer was hit and dragged a short distance until he was able to break free from the door, relay police. Olkerill sped off from the scene. Luckily, the officer only suffered minor injuries.

Back up arrived and Martin was taken into custody for resisting, obstructing, and delaying a police officer. Moments later, Olkerill returned to the area and was arrested for assault with a deadly weapon and shoplifting and placed on a $40,000 bail. Martin was held on a $5,000 bail.