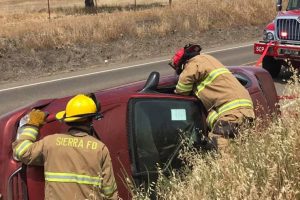 First responders at the scene of J-59 crash

Keystone, CA – A solo vehicle collision on J-59 resulted in just minor injuries but sent a frightened pooch running away into traffic.

The crash happened on J-59/La Grange Road, south of Old Don Pedro Road in the Keystone area of Tuolumne County this past Wednesday morning. The CHP reports that 31-year-old Bernardo Camacho Jr. of Modesto and his dog were traveling north in a 2001 Toyota Corolla at around 60-65 miles per hour. Camacho told officers that he was distracted by his cellphone and his car drifted onto the shoulder. He lost control of the vehicle and it overturned onto its left side.

Initially, the CHP relays they were told the driver fled the scene, but he returned to the scene on foot telling officer that was not the case. Instead, after the collision, Camacho recounts that he realized his tiny poodle had been spooked and ran off, so he took off down the roadway looking for his pet.

CHP Officer Steve Machado relays the good news, “A person saw it running down the road, cause the accident stopped traffic. They opened the door and the dog jumped in and they didn’t know where it came from. They drove home and called the number on collar’s tag and later brought the dog back to him.”

Camacho suffered minor injuries and was treated at the scene.