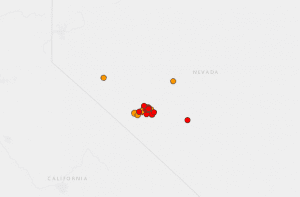 Tonopah, NV — There was an early morning earthquake and a series of aftershocks felt in the Mother Lode.

At 4:03 this morning, the US Geological Survey reports that there was an estimated 6.5 magnitude earthquake near Tonopah, Nevada, and it was followed by several aftershocks, some of which were as high as 4.9 and 5.1 magnitudes. They were felt in areas across the region, as Clarke Broadcasting received numerous phone calls from various Tuolumne County residents. The epicenter was approximately 35 miles outside of Tonopah, just east of the Sierra Nevada range. Tonopah is situated between Reno and Las Vegas.