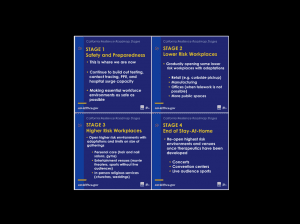 Sacramento, CA — Governor Gavin Newsom says California will move out of the first phase of Coronavirus restrictions in the next couple of weeks, but it will likely be months until the final two stages.

The Governor’s Office reports that California remains in stage one, which includes “continuing to build out testing, contact tracing and increasing hospital surge capacity.” Only “essential” businesses can be open at this time.

Phase two, which Newsom says will come in “weeks not months,” includes opening some lower risk workplaces with adaptations. These businesses include “retail (e.g. curbside pickup), manufacturing, offices (when telework is not possible), modified childcare facilities, and more public spaces.

The fourth and final stage is “ending the stay-at-home order” and allowing for concerts, live audience sports and business conventions.

No dates were given as to when the phases will take effect. However, Newsom stated that Stage Four will likely not occur until there is a vaccine or new effective treatment developed. Adding, “Being back at concerts and convention halls with tens of thousands of fans will take some time.”

We reported yesterday that the Governor is also exploring the possibility of pushing for the next school year to start earlier than normal, possibly in late July or early August.

Click on the image box to see the various stages, as released by the Governor’s Office.