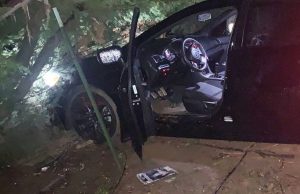 Soulsbyville, CA – There was nothing to celebrate after a birthday bash in Soulsbyville when one of the guests was arrested for theft and DUI.

A report of a burglary at a residence where a party had recently wrapped up brought Tuolumne County Sheriff’s Deputies to the home on Caylor Drive early Sunday morning. The owner showed deputies where the window in a door had been broken to gain entry.

The only thing missing from the residence was the purse of the party host. She recounted an argument she had with guest, Angela Young, 29, of Copperopolis, at the end of the celebration. What it was about was not specified by sheriff’s officials. Afterward, the victim and her boyfriend left the house, leaving Young standing outside. The couple did not discover the break-in until they return a short while later.

While still on the scene, deputies were notified that a CHP officer had found Young sitting next to her car that was stuck in a ditch nearby. During questioning, deputies determined Young was drunk. They also found the victim’s purse. Young was taken into custody without incident and face possible charges of burglary and driving under the influence of alcohol or drugs.