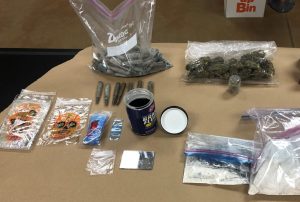 Angels Camp, CA — Cocaine and marijuana were seized during a multi-agency bust at a home in the Angels Camp area.

The Calaveras County Probation Department conducted a search this week in the 1800 block of Appaloosa Road. The Sheriff’s Office’s Narcotics Unit assisted and helped confiscate 9.1 ounces of cocaine and 2.8 ounces of processed marijuana. Numerous rounds of live ammunition were also seized due to the terms of probation. Officials also located evidence of drug sales taking place in the home.

Arrested at the residence were 48-year-old Ricardo Martinez and 55-year-old Shawn Langston, both of Angels Camp.