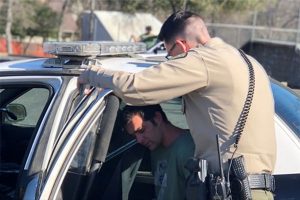 Suspect being arrested in stabbing incident in Sonora

Sonora, CA — An argument over medication escalated into a fistfight that ultimately resulted in one of the men being stabbed.

Immediately after the brawl, which began just after midnight on Wednesday, the wounded man went to the emergency room at Adventist Health Sonora to be treated. Once at the hospital, Tuolumne Sheriff’s Deputies questioned the victim who alleged that 30-year-old Casey Bryan of Sonora, had stabbed him.

The victim detailed how he and Bryan, an acquaintance, were at a residence on Moonlight Hill Road in Sonora and began arguing over prescription medication. Then the fists started flying, and when the two were broke apart, the victim realized they had been stabbed twice and then saw Bryan holding a bloody knife. Sheriff’s spokesperson Nicco Sandelin details, “I believe that it [the knife] was described as possibly being a pocketknife of some sort.”

The victim was struck once in the upper torso and in an arm, which Sandelin says were non-life-threatening wounds. Bryan fled the scene and while deputies searched the area, they were unable to locate him.

On Thursday morning around 10 a.m., a tip led deputies to the skate park off Greenley Road in Sonora where they arrested Bryan without incident for assault with a deadly weapon. Sandelin adds that it is unknown if drugs or alcohol played a role in the stabbing as it remains under investigation.

Of note on Tuesday night, a juvenile was arrested for stabbing another teen over a $5 debt, as reported here.