Gun Found After K9 Sniffs Out Drugs During Traffic Stop 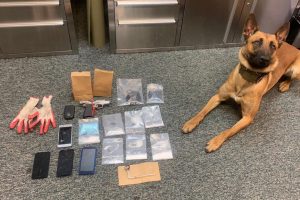 Drugs discovered in the bust by K9 Thor

Jamestown, CA – While the K9 sniffed out drugs during a traffic stop, deputies uncovered a loaded handgun hidden on one of the three arrested.

As a Jeep with a cracked windshield and blocked license plate passed by a deputy patrolling along Highway 108 near Victoria Place in Jamestown, he decided to pull the vehicle over. Inside were three men and a woman. A records checks revealed that one of the occupants was on searchable probation. Then K9 Thor got to work, sniffing around the Jeep.

Several times Thor alerted to the presence of drugs. A search of the vehicle uncovered small amounts of methamphetamine, drug paraphernalia, and several un-used 9mm bullets. Deputies then searched all four suspects.

While patting down 36-year-old Casey Elliott of Modesto, a deputy discovered she had a loaded handgun tucked into the waistband of her pants. Also, she had a large amount of methamphetamine hidden in her clothing.

Elliot was handcuffed and faces several felony drug-related charges including sales as well as an addict in possession of drugs while armed with a loaded firearm.

One of the three males was not charged and released at the scene. The two others, 25-year-old Jesse Holguin of Modesto and 46-year-old Bryan Walters Jr. of Coleville were taken into custody without incident. Both were arrested for possession of methamphetamine. Holguin also had obstruction charges tacked on for giving a false name to deputies.