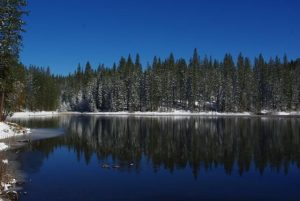 Sonora, CA — Ag lands and surface reservoirs should continue to enjoy some relief from the drought, according to the latest winter weather trends and National Weather Service data.

Meteorologist Holly Osborne of the National Weather Service Sacramento office indicates that the seasonal December through February 2014-15 outlook calls for above normal temperatures and above normal precipitation. “We’ll be warmer than normal, and also snow levels will be higher than normal,” Osborne states. “So, we won’t get quite as much snow pack — like we saw with the storms earlier this month.”

Interestingly, San Andreas, received 6.88” of rain so far this month, 5.09” in last week’s storm, due to convective micro-climatic conditions. In Dec 2013, San Andreas received .51” in precipitation.

“This December is much wetter than last December,” says Osborne. “Last December, we only had about an inch of rain – and so far, this December, we’ve had almost seven inches and we’re expecting more rain to come this week — so, it’s not over yet. But the drought still continues and after a several year deficit, we still need more snow pack up in the Sierra and more water in our reservoirs.”

Osborne says, for in and around the Sonora and San Andreas areas, the forecast is for “an inch to an inch and a half” through Wednesday, with the possibility of more on Friday.

T.U.D. Associate Engineer Glen Nunnelley says that the potential for a “normal” winter rainy season versus the stingy drought year winter last year bodes well, even with the potential for higher than normal temperatures.

“We should still be fine,” Nunnelley explains. “We got through last year. But the higher temperatures mean we should monitor this, because it probably means that we have a little less run off from the snow melt — meaning there may be less snow to melt off later in the season — and our district relies on there being storage in the snow and melting off later in the season.”