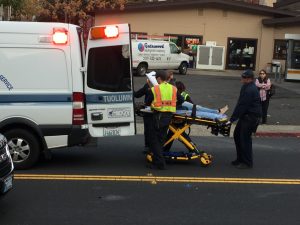 Sonora, CA — A young woman was apparently hit by a vehicle while within a downtown Sonora crosswalk.

The accident, which happened in the 300 block of South Washington Street at Gold Street late in the 3 p.m. hour Tuesday, slowed traffic while responding units, including an ambulance, arrived on scene.

The unidentified woman, who was transported for treatment, appeared to have a leg and possibly a head injury.

Witnesses who were standing in a nearby parking lot reported hearing a thud and seeing the pedestrian fly at least ten feet from the crosswalk before she landed in the middle of the street.

The driver of the vehicle remained on scene, and appeared to be cooperating with the Sonora Police investigation.