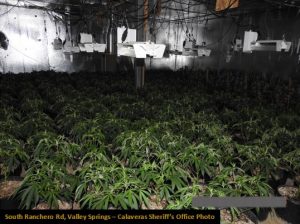 During the service of the warrant yesterday, Calaveras County Sheriff’s spokesperson Sgt. Greg Stark recounts that upon entering a residence in the 2000 block of South Ranchero Road in Valley Springs, the Marijuana Enforcement Team (MET) immediately noticed a strong smell of exhaust fumes. It turned out that the exhaust was being created by a 7,000-watt generator running in the center of the dining-kitchen space to power a portion of the operation’s interior grow lights.

Stark says deputies encountered a 65-year-old male, Wen Min Yang, who was initially non-compliant and soon after located Xiu Lan Yang, a 65-year-old female. She had been lying down in a boarded-up back room and was partially non-coherent due to what was quickly determined to be carbon monoxide exposure. Emergency medical staff summoned to the scene treated both suspects and transported the woman to the hospital for further medical attention.

While processing the scene deputies located 2,527 plants and over eight pounds of processed marijuana. Responding code compliance personnel red-tagged the residence as uninhabitable due to living conditions, electrical hazards and mold.

“It was a standard residential house…other rooms were boarded up and lined with reflective material along the walls, and there was also a large barn and two sheds that were converted into grow spaces,” Stark describes. “The whole property was converted specifically to grow marijuana.”

As a few earmarks of the operation indicate similarities, Stark confirms the case investigation will undoubtedly look to possible links to a known provincial Chinese drug ring active in the Sacramento region and surrounding counties that have included include Calaveras.

Wen Min Yang was booked into Calaveras County Jail on a $100,000 bail on charges of illegal marijuana cultivation and sales, maintaining and renting a drug house, criminal conspiracy, and resisting a peace officer. Xiu Lan Yang is being similarly charged pending her release from the hospital.

Stark acknowledged that while the two suspects might not consider themselves fortunate to be caught, things could have turned out worse. “A 7,000-watt generator is a pretty big one to be running inside your house. It is probably safe to say that the female suspect had stayed there…she may not have made it…it could have turned out pretty bad,” he confides.

While the Yangs could be responsible for cleanup and abatement of the property if the case is adjudicated and that becomes part of the sentence, it could also fall back onto the landlord, Stark says. He adds a few words of advice for current and potential landlords. “It does not hurt to do extensive background checks — and check on your property frequently to make sure that this activity doesn’t happen, and you are not responsible for the aftermath.”